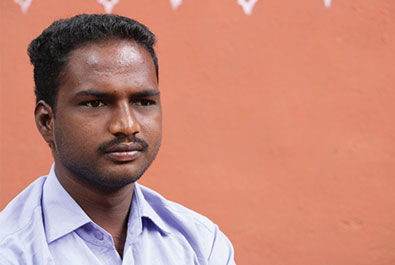 20 year old Sunil from tdh supported project Sakhi has been associated with the project for 4 years but can safely say that his life has already changed. His village in Hampi is a tourist hotspot in the country and gets a fair amount of income generated from the tourism industry. However there are many issues that the area faces and food insecurity, waste disposal problems are a few of those.

When Sunil first started working with Project Sakhi he would attend a lot of trainings and workshops which helped him understand the problems and issues in the area. The trainings also gave the young boy a way to explore his interests and find a path into a possibly financial secure future. Sunil had a natural flair for photography and through the trainings provided by the project staff began to take an interest in it. In the 4th year of his association with the project Sunil was identified as one of the youth members with potential and was given a fellowship to focus on issues faced by the communities and the area and find solutions. Sunil realized that one of the biggest issues faced by the area was a huge free open space which was being used as a communal dumping ground. The garbage was not being segregated and just being dumped, sometimes some of the more harmful materials like plastic etc would also be burnt in the open giving rise to toxic fumes. Sunil used his expertise in photography and created an awareness campaign around these using descriptive photographs. He then worked with the project and the youth groups to start an interaction with the district headquarters and concerned officials and duty bearers to help them understand the awful situation and request for help.

He also started making the community more aware so that they would not dump their garbage in that space.

After months of campaigning he has finally managed to get more garbage disposal trucks assigned for this area so that the garbage is cleared more frequently and does not stagnate. The community has also actively started waste segregation and there is heightened awareness on not using common spaces as dumping grounds.

To supplement this initiative Sunil has also started kitchen garden activities in 15 villages. He believed that this would not only make the environment greener but would also solve the problems of food insecurity which is a serious concern for the area. His dream is to extend this activity to as many as 100 villages.