A girl’s fight: A community’s win 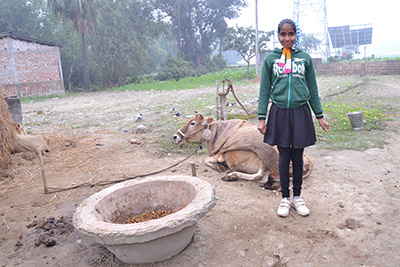 The small village of Rampur in Bihar would be just that any other in that region – except there’s something that sets it apart. The village has almost zero incidences of child marriage – something almost unheard of amongst the marginalized communities who live in these parts.

The Katihar district in Bihar is characterized by extreme poverty and migration for decades. The river Kosi flows through this region and every year hundreds of families are displaced due to floods. They not only lose their homes but also all their belongings and important documentation which makes it difficult for them to access any proper services and children lose touch with education as well. Desperately trying to make ends meet – parents prefer to marry their daughters off early as a means of reducing the burden and having less mouths to feed. Many of these girls are trafficked away in the guise of marriage and are forced into prostitution and sex slavery.

When terre des hommes supported project Bhoomika Vihar started work in these areas the project team was met with extreme resistance from the traffic mafia in the village who facilitated these child marriages. However they began to turn the tides – one girl at a time. 13 year old Komal Kumari was one of their first success stories.

When the young girl got to know that her parents were planning on marrying her sister off – the girl decided to approach the team members of Bhoomika Vihar. She had already interacted with some of the project staff and had begun to understood why child marriages should be stopped. With the help of the project team members –Komal waged a war against her parents to stop her sister’s wedding. It took all her powers of persuasion and a self imposed hunger strike but finally her parents came around and agreed to call off the wedding and let their elder daughter study. Today the girl has completed her B. Ed. and is on her way to becoming a teacher.

However, Komal did not consider her job done with her sister – she decided to speak up for all the other girls in Rampur who could be subjected to the same fate. Slowly her influence began to spread and Komal became the spokesperson for many girls within her village. Today she and project Bhoomika Vihar have ensured that the entire community has stopped child marriage and has become vigilant about trafficking as well.

25 girls who were formerly under the threat of being married off before they became adults – have now joined Komal’s fight as community mobilizers and are actively bringing about change.