Violence against Children in the Midst of COVID 19 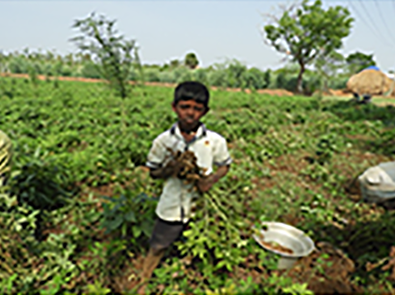 In the State of Tamil Nadu, the Rural Organization for Social Education (ROSE), has been working with the most marginalized daily wage farm and agricultural labourers. The COVID 19 lockdown has further distressed their economic and social conditions.Since 24th March 2020, ROSE has been working with the district administration of Pudhukottai to ensure food security for migrant workers stranded in the district as well as to establish a market to help thousands of farmers sell their agricultural produce at a fair price. The ROSE team also obtainedthe necessary officialgovernment permissions to procure agricultural produce from the farmers directly and has been distributing it to community members in need of food.

The frequent interactions of ROSE team with the agricultural community in Pudhukottai brought to light the attitudinal change among the people towards children’s education. Though there have been no studies or reports conducted thus far, the informal interactions revealed that many of the families are hesitant to send their children back to school citing the present economic crisis and the possible loss of jobs in the industrial and IT sectors. During the relief distribution, the team met almost 200 children working as farm labour, either in their own small patch of land or for a minimum wage in their neighbour’s land. Now in Pudhukottai, children selling the vegetables on the village roads have become a common sight. These children earn Rs. 80 per day as farm labour, while they earn around Rs 150 per day by selling vegetables on the streets.Though many of the children claim that they are supporting their families as the schools are closed, parents are contemplating  not letting their children continue their education instead letting them learn agricultural practices to till the land. In Pudhukottai District, very recently the dalit children have come out of the shackles of bonded labour but the present crisis situation seems to push them back by at least a decade.

When child labour is so rampant among even those children who are living with their families, the situation of orphan children or children from troubled families is sadly even more challenging. Venkatesh’s story is proof of this.

Venkatesh is waiting to write his 10th standard board examination. He is 15 years old and is residing at Sivapatti village of Pudhukottai District under the care of his grandmother. His parents were daily wage workers in a brick kiln. He lost both his parents two years ago. His father succumbed to tuberculosis and his mother died in a road accident. Since then, his sister and brother have been adopted and are being cared for by his mother’s older sister. Venkatesh chose to stay with his grandmother. With no landholdings, his grandmother worked as an agricultural labourer in the field.The Mahatma Gandhi National Rural Employment Guarantee Act’s (MGNREGA)that ensures 100 days work helped the two of them to meet their basic needs. With his grandmother’s support Venkatesh continued his studies and hoped to go to college.  But now Venkatesh’s grandmother has no livelihood and limited opportunities, as marginalized farmers no longer hire labourers due to their inability to pay wages during the COVID 19 lockdown. There is also a lot of confusion with regard to the age limit for work under MGNREGA and Venkatesh’s grandmotherwho is almost 70,is unable to access any employment or scheme.During the lockdown Venkatesh has been hired by an earth mover company. He is operating machinery to excavate and dig the earth for agriculture and construction. He is paid Rs. 250 per day which is helping the family to survive during the COVID 19 crisis. Venkatesh is still not clear about going back to school when it reopens as he has no other means of supportinghimself and his grandmother.

Rural Literacy and Health Programme, (RLHP) terre des hommes Germany’s partner organisation  has been working with slum communities and severely marginalized groups in the Mysore and Chamrajnagar districts of Karnataka. From the end of March 2020, the organization is activelysupporting relief and advocacy work to ensure the livelihood for migrant workers, daily wage workers and farmers. They are also collaborating with Childline in Mysore.Hence the RLHP team has also been attending to the calls of children in distress and addressing child rights issues working with the relevant government departments. During the lockdown, RLHP was able to address 18 cases of child labour in Mysore and 12 cases in Chamrajnagar. The teamalso prevented 46 cases of child marriage in Mysore and 15 in Chamrajnagar. RLHP has historically worked on child labour prevention projects that ensured education for children living on the streets and from migrant families. However, during the present economic and livelihood crisis, the team is meeting manyschool going children who have started working to support their families. Here are a few stories of these vulnerable children:

Tanish is 13 years old. Helives with four other members of his family inJyothinagar. His parents were daily wage workers who have so far managed to educate their three children in government schools. Tanish has just completed the 6thstandard. The Corona virus lockdown pushed his family into an acute economic crisis as both his parents have lost their livelihood. Their little savingswent early on in the lockdownon food for the children and taking care of their basic needs.  Tanish’s parents have been trying to find some work.Additionally, they haveset up a small plastic household articles shop on the pavement. Tanishis the oldest child and is being made to take care of the shop, while his parents look for work outside. When the Childline team identified Tanish as a child worker his parents said that he is helping the family during the school holidays. The parents were counselled on the rights of children and the legislations that prevent children from working even during holidays. The family has also been given support to find jobs in the city and follow ups are done to ensure that all the three children continue their education once the school re-opens.

Nine year old Shoyebexcelled in school doing well in both academics and sports. His father is an auto driver and his mothera domestic worker. Both of them have lost their jobs during the lockdown. Though the family received food rations from the Government Public Distribution System they needed money for additional essentials and groceries. After a point of time the parents found it difficult to feed the three children. That is when Shoyeb’s parents decided to set up a mobile fruit shop on the pavement of Mysore city.  Since schools were closed and Shoyeb was at home, he was made to manage the shop in the mornings while his parents tried to find other low paying jobs and manage the household chores. The Childline team foundShoyeb selling fruits on the street and asked his parents about his education. His parents have assured theteam that he will continue his education once school reopens, the RLHP team informed the parents that sending him to work even during the holidays is not acceptable as per the rights of the child. Further the team assured the parents that they could ask the RLHP if they found it difficult to send children to school in the coming months or required alternate sources of income.

As widely reported in the news, there has been an increase in child marriages during the lockdown. This is due to the severe economic crisis. Many vulnerable families are facing a bleak futurein the wake of COVID 19 crisis. Childline India, Karnataka is seeing a spike in the number of child marriage cases during the lockdown. RLHP child line unit received a call that Sonika residing in Otagalli village, aged 15 yearswho had just completed her 9th Standard was to be married off the next day. The RLHP team informed the concerned District Child Protection Unit, Special Juvenile Protection Unit and the Police Department about the impending child marriage. Along with the Government officials, the  RLHP team visited the village in the morning where the marriage preparations were in progress. After verification of the school documents and other age proof of the girl, the groom and his parents were arrested. The girl’s parents tried to convince the local officials that their economic and social situation during the COVID 19 had forced them to organize this marriage. They also argued that as agricultural daily wage labourers with no income it has become challenging for them to take care of their children and hence getting their daughter married will reduce the family burden. In the police station the parents of the girl and the groom were counselled and sensitized about the law pertaining to the legal age of marriage.

The RLHP team sensitized the families about the legal as well as the health implications of child marriage and the right to education of children especially girls. The girl and the boy were also informed about the child marriage prevention act and counselled to not to give in to parental pressure. The families were released after getting a written statement that they would not get their girl child married before the age of 18. The local Panchayat and other key stakeholders were also informed and asked to take up frequent follow up visits to ensure that there is no child marriage in their village.