Young Anupama lives in the tribal belt of Assam 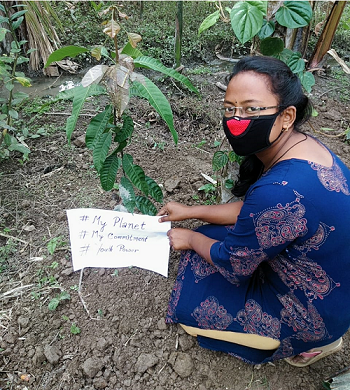 Young Anupama lives in the tribal belt of Assam where livelihood options are hard to come by. The community itself has many issues and faces high rates of youth unemployment and migration. Tdh supported Project SATRA has been working in these areas for a long time and when Anupama came in contact with the project workers – she was already familiar with the organization and the work they were doing. She first associated with the project directly during a bee keeping workshop that was arranged and soon decided to work more closely with them.

Through repeated sessions and interactions Anupama became more sensitized to the issues that her community was facing and identified over usage of plastic as one of the main environmental hazards. She realized that the excess of plastic usage not only caused a garbage hazard but it also sometimes clogged up drains, affected fields and crops and could very soon become an uncontrollable threat to the environment. Anupama has mobilized the youth group to actively take this on and has organized them allocating specific responsibilities to generate awareness, reduce plastic, encourage people to use organic and natural alternatives and also focus on proper waste disposal.